Smart Horizons Career Online Education (SHCOE) has released its first set of recidivism data for its online high school program delivered in Florida Department of Corrections (FDOC) facilities. The program, which launched in the FDOC in 2012, shows an 11.6% recidivism rate. This improvement over the FDOC’s most recent 3-year recidivism rate of 25%1 amounts to millions of dollars of savings for Florida taxpayers.

Studies have demonstrated that incarcerated individuals who receive education in prison are 30% less likely to return than those who do not receive education.2,3 The studies also noted that there was no statistically significant difference in learning between computer-assisted instruction and traditional instruction. FDOC records indicate that of the 95 incarcerated individuals who graduated SHCOE between 2012 and 2013 only 11 have returned to prison within 3 years of their release. 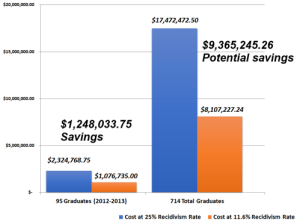 The U.S. Department of Education’s Educational Technology In Corrections 2015 report named SHCOE a primary example of a successful Internet-based education program for corrections. In addition, Dr. John Linton, former Director of the Department of Education’s Office of Correctional Education, stated that “Florida is leading correctional education across the nation in making on line learning opportunities available to adult prisoners.”4 Wardens in the FDOC also praised the program for its ability to help people stay out of prison and find jobs after release.

Along with earning an accredited high school diploma, students complete a Career Certificate that prepares them with the professional skills needed to seek employment upon reentry. In addition, the core curriculum includes real-world life skills such as financial literacy, budgeting, anger management, conflict resolution, and communication skills.

Expanding Education Services to Lower Recidivism and Save Money

SHCOE realizes that this data is preliminary. However, these initial findings are congruent with the most recent data on correctional education’s effect on reducing recidivism. The anticipated savings through reduced recidivism of online high school students are significant. There is also considerable opportunity to grow and expand these types of educational programs—of the 35,117 incarcerated people released from prison in 2010–2011, 69.5% of those eligible for academic programs did not receive services prior to release.5

The FLDOC Online Campus is sponsored by Smart Horizons Career Online High School, LLC and the State of Florida Department of Corrections.

2 Davis, L., Steele, J., Bozick, R., Williams, M., Turner, S., Miles, J., … Steinberg, P. (2014). How Effective Is Correctional Education, and Where Do We Go from Here? The Results of a Comprehensive Evaluation. Bureau of Justice Assistance, US Department of Justice.

3 Corrections Rehabilitative Programs Effective, but Serve only a Portion of the Eligible Population. February 2007. See http://www.oppaga.state.fl.us/Reports/pdf/0714rpt.pdf

5 Office of Program Policy Analysis & Government Accountability, an office of the Florida Legislature, Corrections Rehabilitative Programs Effective, but Serve only a Portion of the Eligible Population. February 2007. See http://www.oppaga.state.fl.us/Reports/pdf/0714rpt.pdf